Firing Up the Quantum Future

At this quantum tech event, we have Prof Michael J Biercuk, CEO & Founder of Q-CTRL and one of the world's leading authorities on quantum physics and technology, present a keynote on 'Starting Up the Quantum Future'.

Quantum technology, harnessing quantum physics as a resource, promises to be as transformational in the 21st century as harnessing electricity was in the 19th century. In this presentation, Michael will introduce the emerging field of quantum tech and describe how he and colleagues around the world are working to build a greenfield industry. Beginning with an intuitive picture of how quantum technology expands on the technological state-of-the-art, this presentation will inform about the potential and promise of exploiting quantum physics in computing and sensing. Michael will also introduce Q-CTRL, a global quantum tech startup headquartered in Australia, focused on making quantum technologies useful through quantum control engineering. This presentation will conclude with lessons for the deep tech founder seeking to transition from fundamental research to entrepreneurship.

Following his presentation, Michael will join a panel discussion on an overview of the global quantum economy and the future of quantum software, as well as why the focus on quantum software when quantum computers are not yet ready. 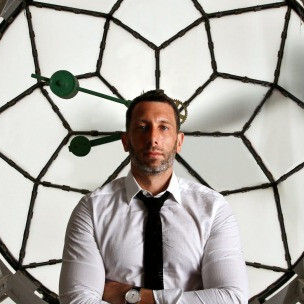 Prof Michael J Biercuk is a Professor of Quantum Physics and Quantum Technology at The University of Sydney. He leads a team working to develop advanced technology powered by quantum physics. He is also Chief Investigator of the Australian Research Council Centre of Excellence for Engineered Quantum Systems. Out of his academic research, Michael saw a gap in the market for a company which made his team’s specialist knowledge and capabilities available outside of the lab; he founded Q-CTRL in 2017 with venture capital backing from some of the world’s leading investors.

Michael completed his Master’s and PhD at Harvard University and his undergraduate degree at the University of Pennsylvania. After university, he held a research fellowship in the Ion Storage Group at NIST Boulder under the supervision of 2012 Nobel Laureate in Physics Dr David Wineland. He has also worked as a consultant to the Defence Advanced Research Projects Agency (DARPA), helping steer government investments in quantum information and next-generation computer architectures.

As one of the world’s leading authorities on quantum physics and technology, Michael is a regular contributor to both the technical literature and the popular press. He is a TEDx and South by Southwest (SXSW) speaking alumnus and winner of the 2015 Eureka Prize for Outstanding Early Career Researcher. Dr Ng Hui Khoon did her undergraduate in Cornell University, and then completed her PhD (2009) in the group of John Preskill at the California Institute of Technology, on the subject of theoretical quantum information and computation. Upon graduation, she returned to Singapore as a postdoctoral researcher at the DSO National Laboratories of Singapore, spending part of her time at the Centre for Quantum Technologies (CQT) at the National University of Singapore (NUS), within the group of Berge Englert.

In 2013, she joined, as an Assistant Professor, the newly founded Yale-NUS College in Singapore, a joint liberal arts and sciences college set up by Yale University and NUS. She has maintained a joint position in CQT, becoming a CQT Fellow in 2019. Her research focuses on theoretical aspects of quantum computation, particularly on noise control, quantum error correction, and fault tolerance. Another productive area of research is in quantum tomography, and lately, noise tomography, drawing on both areas of her expertise.
She is currently leading the quantum information and computation efforts within MajuLab, a French CNRS lab situated in Singapore, and maintains collaborations with well-known researchers around the world. Joe received a BSc in Theoretical Physics from University College Dublin and a Doctorate in Philosophy from Oxford, where he went on to become a fellow of Merton College. Prior to founding Horizon, he led the Quantum Information and Theory group at Singapore University of Technology and Design, where he was a tenured associate professor and was a principal investigator at the Centre for Quantum Technologies. He has published at the highest levels in both theoretical computer science (FOCS,STOC, CCC, ITCS) and physics (Science, Nature Physics, Physical Review Letters, Physical Review X), and has been named as a National Research Foundation Fellow and to the MIT Technology Review Innovators Under 35 Asia list. His main focuses are Machine Learning and Optimisation, and the development of products for financial time-series modelling. His team is also skilful in computational techniques such as Monte Carlo simulation and Partial Differential Equations. This wide breadth of expertise has enabled him and his team to address key problems in the Financial, Energy, Manufacturing, Logistics, and Life-science sectors.

Previously, Mattia gained a PhD in Theory and Simulation of Condensed Matter from King's College London where he researched first-principle electronic transport with high-performance computing. Victor Tan is currently part of SGInnovate’s Venture Investing team in Singapore and concurrently manages investments and operations in North America. SGInnovate is focused on enabling entrepreneurs in Singapore to build startups with a strong emphasis on science and deep technology. As a private organization owned by the Singapore Government, they bring together partners from the private sector, institutes of higher learning, and research organizations as part of Singapore's broader ecosystem of innovation.